Hooligans ‘put up their hoods and attacked pub’ 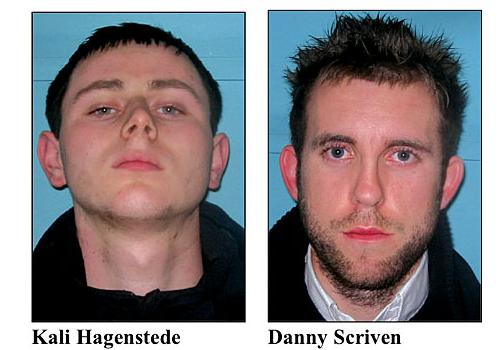 Spurs fans caused £2,600 of damage to The George after derby

A PAIR of Spurs supporters who joined a mob smashing up a pub favoured by Arsenal fans have been jailed for 15 months and banned from matches for six years.

Postman Danny Scriven, 26, and Kali Hagenstede, 21, were sentenced at Blackfriars Crown Court on Friday after pleading guilty to a charge of ­violent disorder.

They had been being caught on CCTV joining a 20-strong mob of Spurs fans who set upon The George Pub, Eden Grove, during the Arsenal-Spurs derby on October 31. Mr Hagenstede, of Joyce Avenue, Edmonton and Mr Scriven, from Long Lane, Hillingdon, were said to be part of a large group of hooligans who smashed pub windows, armed with a pole, dustbin and bar stools, after their side’s 3-0 defeat, causing £2,600 worth of damage.

Because of the nature of the derby rivalry at last October’s game, police had classed it as high risk and nearly tripled the number of officers on duty from 180 to 560.

He said: “On that day we expected Arsenal and Tottenham to have groups of risk supporters. Everything was fine during the day until Arsenal risk fans moved away from The George. The pub was then full of decent ordinary people.

“Unbeknownst to everyone these Tottenham risk supporters who weren’t at the match or in the borough during the day arrived undetected on the tube at Holloway Station.”

He said the group, which was made up of faces well-known to the police, “covered their faces, put their hoods up and attacked the pub” using street furniture, bricks and poles.

He added: “The staff and clientele in there were innocent, non-risk supporters and the judge highlighted that.”

PC Dearden said the group struck at 6.30pm believing the police had stood down.

He said: “More and more they try to have localised violence long before or after a game in an effort to avoid detection. Arsenal’s risk supporters drink there. It’s often the most disrespectful thing to come and cause damage to your iconic pub.

“In my opinion they turned up there knowing that Arsenal supporters had left it undefended and that was really cowardly.”

He added: “It’s unfair to say that this pub is where hooligans drink but the reality on match days is that it does have the highest proportion of risk supporters and we can control them. The majority of the time they are better behaved because they have a code of conduct.”

PC Dearden said some of those involved in football violence have watched too many hooligan movies and don’t realise the severity of the punishment they face if caught. He added: “If it’s football-related disorder, it’s far more serious, and the judge reflected that fantastically. It might make some wannabe hooligans think twice.”

arsenal fans told spurs they were in the george