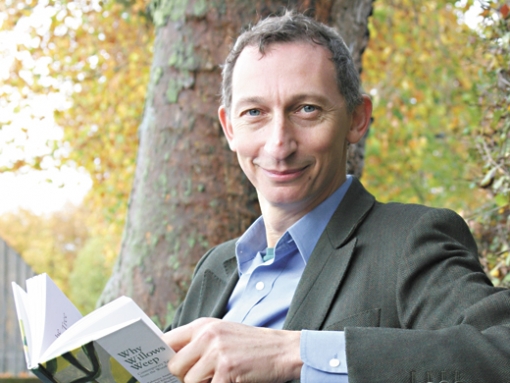 If trees had minds of their own, what would they choose to be? Not coffins, crucifixes or gallows, writes author William Fiennes in the opening pages of new short story collection, Why Willows Weep. No, far better to be made into books once the axe has fallen.

Given the reliance on trees that the 19 leading authors whose woodland fables make up the collection must surely have, Fiennes’ flight of fancy is a comforting leap of the imagination indeed.

Yet this is one book that allows authors and readers alike to rest easy – for every copy sold, at least five trees will be planted by the Woodland Trust.

Indeed, the whole idea of the collection, which features fables from Ali Smith, Maggie O’Farrell, Blake Morrison and Richard Mabey, is to help us all to think that bit more about the need to make our shores a leafier place.

At least that is the hope of Woodland Trust trustee Jonathan Drori and his wife, the novelist Tracy Chevalier, who dreamt up the plan to publish a short story collection in aid of the 39-year-old conservation charity.

“I, along with the other trustees, have always been trying to think how we could get British people to have more of an emotional connection with trees and woodland,” says Drori, who lives with Girl with a Pearl Earring author Chevalier and their 13-year-old son in Dartmouth Park.

“I was talking to Tracy about it one evening and we were both thinking maybe there’s something we could do with authors and stories and we hit on the idea of a collection of short stories,” Drori adds.

Calling on her contacts, Chevalier enlisted 18 writers who, like her, were well known in their own right, willing to put their own love
of woods and trees into story form, and prepared to hand their work over for free.

“Part of the brief was that they would be contemporary modern-day fables so that modern people would find a connection,” Drori says.

“We wanted it to be a way into woodland and trees for a completely different sort of audience – people who might not usually think about environmental things or the beauty of trees but might be drawn in by the stories of trees.”

Chevalier’s altruistic authors and their crafted and fantastical fables certainly let you see the trees for the wood; in Why Willows Weep, the blackthorn, lime, oak, silver birch and a host of other natives are not mere lumps of bark and leaf, they are plotting, dreaming, talking, thinking, feeling beings.

For his part, Drori hopes that human touch will inspire support for a conservation body that not only cares for a thousand open access woods, but campaigns to protect trees and hands out free tree and hedge packs to schools and communities as well.

“We are trying to push the boundaries of who our supporters are,” adds the 50-year-old, whose own love of trees grew from childhood outings to Richmond Park and Kew Gardens with his father.

“I think there are people who will read these stories who wouldn’t normally think of supporting a charity like the Woodland Trust but might start to feel that we can’t take woodland and trees for granted and it’s good that someone is doing that. Trees are not only vital to biodiversity, they form part of the lungs of our environment, they are beautiful, they make people happy.

“If we get more members out of it that would be fantastic but if we just get people to have the feeling that more trees are something that is worth having then it will be a job done well.”