Skip to main content Skip to navigation
Home >> News >> 2012 >> Apr >> 'Staying in classroom until 68 is too much': striking teachers on the march over proposal to raise retirement age

'Staying in classroom until 68 is too much': striking teachers on the march over proposal to raise retirement age 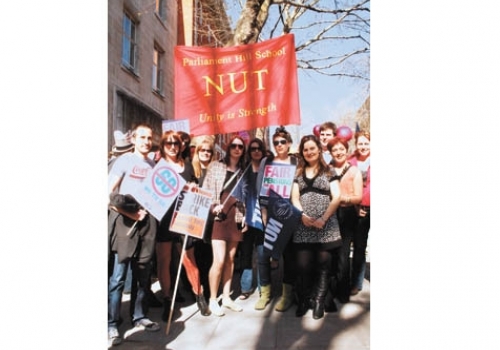 STRIKING teachers warned education will suffer for all pupils if they are forced to stay-on in the classroom until they are almost 70.

Teachers in Camden say they suffer burnout and on average retire around the 58 to 61 mark, but the government wants them to work until they are at least 68.

Union chiefs said all schools closed or were partially closed as hundreds of teachers marched through central London yesterday (Wed­­nesday) in protest at plans which they say amount to a massive pay cut.

Parliament Hill maths teacher Lesley Goddard said: “I think, certainly at our school, everyone is into the idea of equality in education.

“The change to the pension, it will affect everyone and pupils’ education.

"It could mean the best teachers leaving. People will be worn out.

"I think most people think the idea of staying on until 68 is too much – do parents want their children taught by people that age?”

She added: “This is not just about us, it’s about everyone.

"Other public sector pensions will be reduced because they will be compared against ours.”

A 25-year-old teacher said from next month she would be paying up to £90 more each month to get the same when she retires.

Union chiefs said this would rise in the next two or three years to around £150.

Andrew Baisley, secretary of Camden National Union of Teachers, said: “In 2015, teachers will take home less than they were in 2011.”

Younger teachers told the New Journal there could be a problem with older teachers grappling with new technology, changing teaching methods and relating to teenagers.

The march left Malet Street, Bloomsbury, at around 12pm and snaked through central London ending in a rally outside the Department of Education, Victoria.

There were banners from Acland Burghley, La Swap, Parliament Hill, Hampstead, Camden School for Girls, Haverstock and William Ellis secondary schools. Placards read “No to 68” and “Fair Pensions for All”.

A council spokesman said several secondary schools were letting sixth-formers and exam students with revision classes come in to school.

Labour’s finance chief Cllr Theo Blackwell, who did not join the protest, said: “Obviously, strikes are inconvenient to working parents.

"But we’re fully behind Camden teachers on strike who are protecting their fully funded pension scheme from government attacks.

"It must seem very unfair to school teachers to see their pension undermined, while people earning over £150,000 are getting a tax cut.”