Skip to main content Skip to navigation
Home >> News >> 2012 >> Apr >> PROPERTY: The cost of rising rents and how benefits cap is forcing Camden's young to leave the area they grew up in

PROPERTY: The cost of rising rents and how benefits cap is forcing Camden's young to leave the area they grew up in 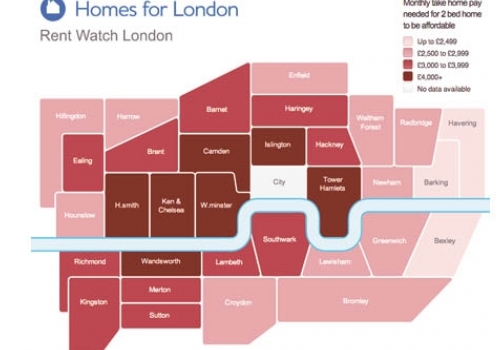 Above is a chart showing income needed to rent in boroughs across London
Published: 4 April, 2012
by DAN CARRIER

THE changes in housing benefit laws that mean councils will only pay a set proportion of rents is leading to a mass exodus of young people born in Camden who can no longer afford to live here, claim housing charity Shelter.

The coalition government introduced a new law putting a lid on the amount of rent that councils would cover – and for those living in Camden, where rents are high, it means scores are being priced out of the neighbourhoods they have always lived in.

A report published last week by Shelter has found that to rent privately in Camden, families would need to bring home around £84,000 a year – a figure way above average earnings.

With swathes of the borough once enjoying a good social mix of people, homes were affordable.

But the gentrification of neighbourhoods means sons and daughters are now being forced to move far away.

Miss S, who does not want the New Journal to use her name, has found herself caught in a trap by the lack of affordable council housing in Camden and the changes to the housing benefit laws.

Miss M, who went to primary school in Belsize Park and then to La Sainte Union secondary school, was working in Hampstead.

She became pregnant and was sacked by her boss – a case that led to her winning an employment tribunal.

“I was living with my boyfriend’s parents and then I had to move back with my mum,” she recalls.

Her mother has a small flat and, aged 28, Miss S did not want to stay there indefinitely, especially with a baby on the way.

She approached Camden Council and was told her options were extremely limited.

There was no chance of getting enough points to get a council home, and with housing benefit caps coming in, the chances of finding anything affordable in the areas she wanted to live were virtually nil.

“I had worked non-stop for 10 years and been completely self-sufficient,” she said.

“I did not want to be living in a flat with my mum with a baby on the way.

“They said they could find me a hostel or the other option was to look in the private rental market.”

She eventually found a small flat in Haringey – a couple of bus journeys away from her friends and family, but nonetheless with a roof over her head.

However, this situation did not last long.

As new housing benefit caps came in, Miss S found herself once more on the verge of being homeless.

“I had such a small number of housing points there was no chance at all of ever getting a council house in Camden,” she said.

She looked around for private rented homes, with the help of Camden staff, but none were available.

“The benefit cap means I basically am forced to move out of London and away from all the people and places I know,” she said.

Shelter’s head of policy Toby Lloyd said the situation in Camden is the same across London.

“Camden is a microcosm of what is happening across the capital,” he said.

“As a borough it contains within its borders all the problems we find in London.

Shelter’s research shows that with rents rising at around 7 per cent a year, to afford the lowest level of private accommodation you would need to earn a minimum of £52,000 a year.

Shelter’s answers include lobbying the Mayor of London to use new powers to stimulate an affordable homes building project.

In return, they would get a secured income instead of having to find new tenants every six months.

He said special grants were available for those who found themselves in situations such as Miss S, and that the issue was longer term than simply telling people to move to where they could afford to live.

He said: “The problem is there are too many people moving into London to look for work.

“We need to make living in the north more attractive.”