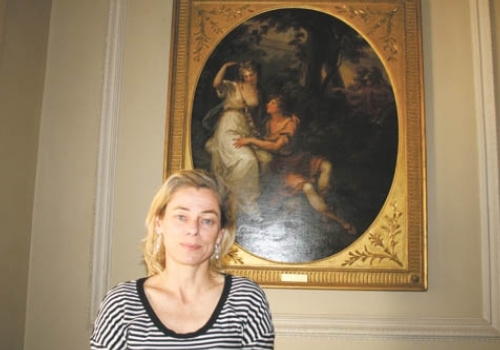 IT is said that moving home is one of the most stressful experiences anyone can go through – so this week spare a thought for Susan Jenkins, the curator at Kenwood House.

She is overseeing the removal of some of the nation’s greatest art treasures while Kenwood closes for a year-long restoration project.

Ms Jenkins, who is English Heritage’s art curator at the Robert Adam mansion, has had to decide what to do with the Iveagh Bequest – a collection of works by the likes of Sir Joshua Reynolds, Thomas Rembrandt and Anthony Van Dyck.

The answer is the first ever tour of the bequest to four major American art galleries.

The house will be shut at the end of March for a massive restoration project, reopening in September 2013.

She said: “With Kenwood closing, we had to ask what we should do with the collection?”

Ms Jenkins met the American Federation of Arts and struck a deal to take 48 of the house’s works to four American cities.

She hopes the “holiday” will not only raise the profile in the States of the Iveagh Bequest, but will also help raise funds.

She added: “We hope the tour will not only give more people the opportunity to see these works, but will raise the profile of Kenwood’s collection.”

The paintings will be carefully lifted from the walls and put into special containers.

Because of insurance, they will travel to the States in three separate tranches.

Security will be tight and English Heritage are, for obvious reasons, not willing to make known too many details of how they will move these priceless works.

Some of the treasures will be lent to British art galleries.

Kenwood’s Vermeer, The Guitar Player, will go to the National Gallery and be X-rayed.

Art historians hope they may uncover earlier drafts or even completely different paintings by the artist.

Ms Jenkins said: “You just do not know what may be found.”

With the artwork gone, one of the most famous Adam designs in the world will be restored.

However, the library today does not tally with what historians know about the room when Adam designed it.

Parts of the room’s décor has been covered with gilt, which he did not do.

Also, a red carpet that has no link to the room’s original state, and 20th-century central heating radiators will also be removed.

Ms Jenkins added: “This is the most important Adam room in London, and he was very proud of his work at Kenwood.

Our research has uncovered a completely different colour scheme originally.”