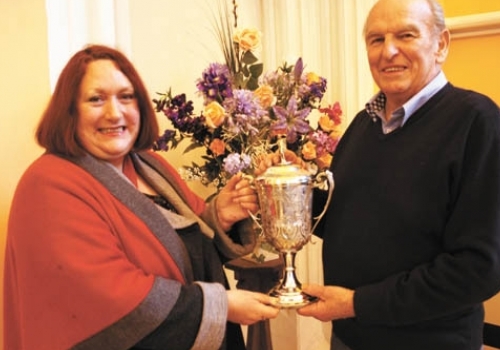 THE sun may have disappeared on Saturday but thanks to gardeners from the Highgate Horti­cul­tural Society there was still a vibrant glow sur­rounding the United Reformed Church.

Colourful exhibits featuring a wide range of flowers from tulips and daffodils to grape hyacinths, amaryllis and pansies trans­formed the main church hall in South Grove into a picturesque garden.

Deputy Mayor of Camden, Heather Johnson, praised all the talented growers for their efforts in helping make Highgate’s 47th spring show such a success.

“It’s always a huge delight visiting gardening clubs, especially the awards as you get to see the very best of every­thing,” said the Labour councillor.

Society chairman Alan Dallman was the biggest winner of the show as he collected the Taylor Haleys Challenge Cup, the Michael Baylis Cup, the Sergent Bowl and the Brough Tankard.

Spring was certainly in the air as children from Tufnell Park Primary School in Dalmeny Road won the Society’s Cup for their pink hyacinths.

Committee member Dr Laura Boothman said: “A lot of work goes into the shows, from baking cakes to arranging exhibits and donating prizes for the raffles. Everyone deserves credit for what is a real team effort.”

• To join the society visit www.highgatehorticulturalsociety.org.uk, for details

• The Taylor Haleys Challenge Cup for most points in horticultural classes was won by Alan Dallman.

• The Michael Baylis Cup for most points in non-bulbous pot plants and cut flowers was won by Alan Dallman.

• The Sergent Bowl for best exhibit in bulbous flowers was won by Alan Dallman.

• The Brough Tankard for best exhibit in non-bulbous flowers was won Alan Dallman.

• The Bush Halsey Challenge Cup for most points in decorative classes was won by Marion Wilton.

• Certificate of merit in floral art was awarded to Roxane Stirling.

• The Society’s Cup for most points in the 6 to 10 years old classes was won by Tufnell Park Primary School.

• The RHS Children’s Certificate of merit was presented to St Michael’s School Gardening Club in Highgate.