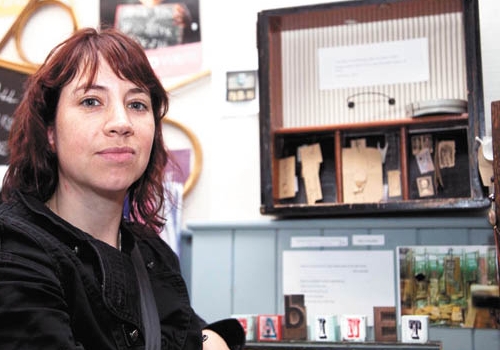 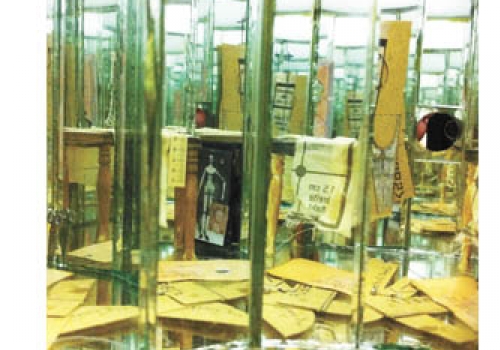 A thief with an eye for quirky art has stolen a piece that made up a crucial link in a Primrose Hill exhibition.
The heist, which took place over the weekend, saw a intricate sculpture made by artist Nina Mankin lifted from a charity shop-turned art gallery, run by the government’s high street shopping tsar Mary Portas.
Ms Mankin’s art show, called “Where I Once Played”, is set in 14 shops along Regent’s Park Road and is described as an art treasure hunt, with clues to collect along the way – but now a crucial part of the trail has gone missing.
The stolen item is called “Behind Closed Doors, The Dressmaker And His Spinneret” and from the outside, looks like a pretty ordinary tin with a hole cut in it.

But if you peer inside, a delightful miniature scene telling the story of a dressmaker and his infatuation with one of his customers is played out.

The shop it was lifted from was run by the artist’s father, Ian, as a textile store for 27 years.

Many of her pieces are miniaturised, and the work stolen includes tiny dress making equipment such as paper patterns, scissors and a work table for a tailor.

Ms Mankin said: “It is so upsetting. This is my livelihood and it is not exactly easy to trying to make it as an artist.

For someone to steal something that has taken a lot of time, energy and heart and soul [to create] is a real kick in the stomach.”

She added: “The piece is rather like an old Victorian curiosity, all in miniature with great attention to detail.

“When you look through the tiny peephole, it reveals a voyeuristic vision of the ‘faux’ dressmakers workshop and inside his obsessed  and somewhat strange mind.”
Other works are still on display: Nina has fitted out a changing area in the shop as a life-size take on the small piece stolen and other examples of her quirky, Gothic-Victoriana styles of installations.
n If you have any information as to where Nina’s works may be, please contact the news desk at the New Journal.