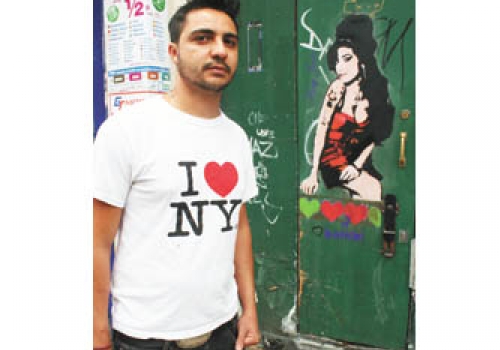 GRAFFITI: While Camden whitewashes the work of other artists, Banksy gets a perspex plaque and careful restoration. But what if it’s a “Winehouse”?
Spray-painted tributes to the singer have appeared in the streets around Camden Town since her death in July – yet it seems Ms Winehouse does not enjoy the same privileged status as the famous Bristolian.
The most recent tribute to the Back to Black star – a print in Camden Road by the graffiti artist Bambi, showing the singer in a red dress with characteristically bold eye-liner and a stud just above her top lip – was removed on Tuesday night by Camden’s graffiti team.
The action has prompted fresh calls for a permanent memorial to the singer.
Jean Siqueria, 25, a former neighbour of Ms Winehouse, called for the Town Hall to commemorate her, saying: “She represents Camden. She’s a great singer and a great personality and I think they should do something official for her.”
He added: “But it is more Camden to remember her with graffiti – in an underground way.”
The appearance of the artwork last week coincided with Ms Winehouse’s birthday. She would have been 28.
A portrait of the singer is on show in Camden Underground station and a picture depicting the singer as an angel has been spray-painted on a wall beside Camden Lock.
Student Miriam Jacob, 29, said the artworks were “an expression of her [Ms Winehouse’s] status as an idol”.
A Camden spokeswoman said they “welcomed ongoing discussion” over a suitable tribute to the singer, adding: “We understand that people wish to remember Amy Winehouse in their own ways, but we have a duty to remove graffiti and fly-posting from public spaces so that residents can continue to  enjoy a cleaner and safer environment.”