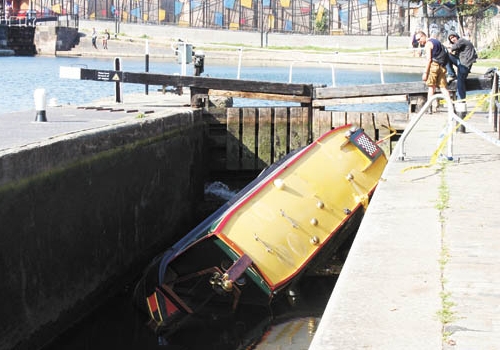 THIS unlucky barge owner got a serious sinking feeling when his boat nose-dived into the canal and got stuck in one of Camden Town’s locks.

The back of the houseboat became caught on a concrete sill at the Kentish Town lock near Kentish Town Road on Saturday evening.
Firefighters spent hours trying to shift it the following morning by trying to pump water from inside while refilling the lock. But the boat began to tilt and the rescue attempt was abandoned.
It was only moved when a crane mounted on a tug-boat later arrived to shift it.
Andrew West, 38, who has owned the boat for a year and half, said he was travelling along the canal with a friend when the pair got into trouble.
“I'm shocked and dazed,” he said. “It is your home, you know, and it’s hard to see it like this.
“The back of the boat got caught on the sill.
“It was late at night, there was a lot of commotion with all the drunks about and there was no lighting.

In the dark the boat drifted backwards and by the time I realised it was in trouble and tried to rectify the situation it had started to sink.”

The interior of the boat was water-damaged and Mr West’s possessions, including a brand-new laptop, were ruined.
Dozens of canal boat owners were stranded behind the blocked lock for almost 48 hours.
Among them was Hannah Cornwell, who had rented a canal boat for her fiancé, parents and pug-dog Alfie and was planning on motoring home to enjoy the late summer sunshine.

Instead they were stuck under the Kentish Town bridge for almost two days.

Speaking from her boat, she told the New Journal: “It’s got really annoying now.

We wanted to sleep in our proper beds and have a proper shower and our dog is getting really fed up.

Yesterday there were about 12 boats but some of them turned around because they had to get back to work.

“I have no idea what they were doing – it  is so simple to get this right.

You have to be pretty distracted to get it caught like that.”

Robert Carr, 52, who works at the welders next to the canal, said: “There hasn’t been a boat caught like this at least five years – and   the last one was on a ­different lock.”
British Waterways confirmed that Mr West would have to cover the cost of his rescue.
A spokesman said: “We have guidance at the locks, in our boaters handbooks moor up before it gets dark and avoid using locks at night.”