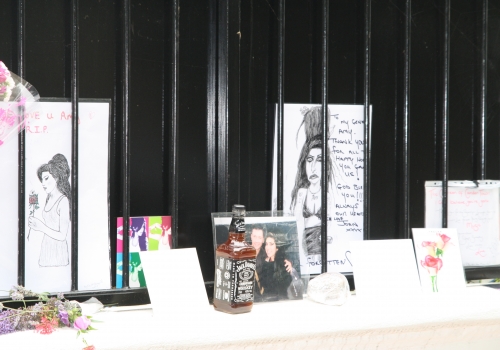 WEDNESDAY JULY 27 14:20 Mourning fans kept residents awake all night in Camden Square, playing Amy Winehouse songs on repeat until police intervened. Labour councillor Angela Mason pledges meetings on how to create 'an appropriate memorial' which does not cause distress to neighbours.

TUESDAY JULY 26 14:40 Mitch Winehouse delivered an eulogy for his daughter at her funeral Edgwarebury Cemetery today. The private service was attended by famous friends Mark Ronson and Kelly Osbourne. Mr Winehouse ended with the words: "Goodnight, my angel, sleep tight. Mummy and Daddy love you ever so much." Around 200 guests were invited.

TUESDAY JULY 26 11.00 The police tape surrounding Amy Winehouse's home in Camden Square has been scaled back. Flowers and whisky bottles now mounting at the front gates. More tributes laid by trees opposite.

MONDAY JULY 25 23:10 Amy Winehouse's funeral will be held tomorrow. A spokesman for her family said it would be a private service.

MONDAY JULY 25 17:05 Stencil-style grafitti has appeared on the side of Starbucks at Camden Lock depicting Amy Winehosue as an angel.

MONDAY JULY 25 14:20 Amy Winehouse's father Mitch Winehouse has visited her home in Camden Square. He told fans: "Amy was about one thing – love. All her life."

MONDAY JULY 25 9.20 Our music editor Roisin Gad El Rab, who met her several times, explains in a piece for The Times of how Amy Winehouse was addicted to Camden Town. She writes: "Most telling was the night in July 2008 when she was due to DJ at the Monarch but turned up looking vacant. With a 'Blake' brooch in her hair, she painted her nails while someone else took over the decks. Events took a bizarre twist when the crowd spent two hours photographing her rather than dancing, as she became a real-life waxwork. Now her neighbours and fans will have to go to Madame Tussauds to see her. Camden is a quieter place today." See Thursday's New Journal for more from Roisin.