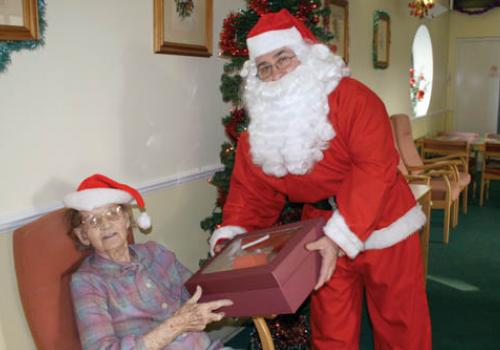 CAMDEN was full of festive cheer on Tuesday and Wednesday as the New Journal went out and delivered Christmas hampers to the borough’s most deserving residents – and it was all thanks to our generous readers!
Hundreds of hampers – paid for by the New Journal’s annual collection – found many worthy homes this year, from single parent families to elderly people struggling to make ends meet.
One of the lucky recipients to be greeted by Santa – who looked remarkably like Parkway’s favourite barber Ossie Mehmet – on Tuesday, was 91-year-old Elizabeth Smith. The former nursery school teacher at St Michael’s Primary School in Camden Street has lived in the borough for 60 years since moving from Ireland. She now lives alone after losing her husband two years ago and is virtually blind and deaf.
“I’m delighted with the hamper,” she said. “It’s so nice to be thought of when you’re on your own at Christmas. I’ve been having all sorts of health problems. I try to look after myself but it’s always good to get a bit of extra help like this.”
Yesterday (Wednesday) Father Christmas was out making deliveries again – this time resembling Dublin Castle publican Henry Conlon! Ten lucky children at Gospel Oak Nursery Centre also benefited from the Hamper Appeal after staff pulled 10 names after a raffle. Children at the centre include those on low incomes and from single parent families.
Val Ryan, whose 11-year-old daughter Sarah greeted Santa on behalf of the children, said: “It’s such a great appeal. We just wanted to make Christmas that little bit extra special for the children that use the centre and the New Journal’s appeal allowed us to do that.”
Lee Smyth, of Truffles Delicatessen in York Rise, Tufnell Park, spent five days making the hampers.
He said: “Not only is it great to deliver hampers to people who need them, but it’s also great that the paper has chosen a local business to make them. I can’t thank the New Journal enough for supporting my business in this time of recession.”
Read next week’s edition to see more pictures and stories from our bumper hamper handout.
JOSIE HINTON