CHRISTMAS ON THE DOLE FOR N1 SHOP STAFF

Tribune reporter ejected by bookstore on last day of trading 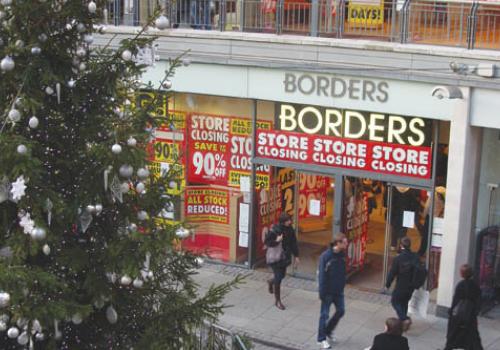 MORE than 40 members of staff at Borders face Christmas without jobs after the Angel bookshop was closed by administrators.
But when a Tribune reporter went to interview employees at the N1 centre store on Tuesday he was escorted off the premises by a security guard.
The Tribune had received many messages of concern about the closure and hoped to interview members of staff and take photographs at the store’s final day of trading.
One employee, who asked not to be named, later said that staff had been warned they faced losing redundancy pay if they talked to the press.
The Tribune was later informed by MCR, administrators for the 45 UK Border stores which have gone into receivership, that prior permission was needed to interview employees.
For almost a decade the spacious two-storey store, with a Starbucks coffee bar, has been a popular base for avid readers, writers and journalists.
Journalist Peter Oborne, TV presenter Lowri Turner, playwright Nicholas de Jongh, writer Christian Wolmar and historian Tim Newark all expressed sadness at the closure and fears for the future of the N1 Centre.
The Angel store, which had slashed prices by 90 per cent in its last days, had an annual £7.5million turnover, mak­ing it the most successful of all the Borders outlets in terms of takings per square foot.
One senior manager said: “We were told we would be closing a month ago and we’re obviously very upset.
“As far as I know, none of the staff has a job to go to. Being Christmas it makes it all very sad.
“Members of the public have been wonderful and very sympathetic. We felt we were very much part of the community here.”
Peter Oborne, a Daily Mail columnist who lives in Highbury, said many people would miss the store. “It was very much part of Islington,” he added.
“With its coffee shop and amazing range of magazines and books there was nothing like it. I really feel for the staff being made unemployed at this time of year.”
TV presenter Lowri Turner was worried that the store would end up an empty white elephant.
“What can replace Borders?” she asked. “And this has come at a time when we have already lost Woolworths at Chapel Market.”
Christian Wolmar, a railway writer from Holloway, said that surfing the internet for books did not compare with browsing in a bookshop.
“If we continue to lose our bookshops we may find that, with no competition, prices for books on the internet will start to increase,” he warned.
A former Evening Standard theatre critic turned playwright, Nicholas de Jongh hoped the return of small independent bookshops would fill the gap left by Borders.
Highbury historian Tim Newark said he always took his family to browse at Borders. “It’s going to be a terrible loss,” he added.
Guardian journalist Caroline Davies, who lives close to the store, described Borders as the heart of the N1 Centre.
And Perdita Kark, daughter of novelist Nina Bawden, said that Borders shutting was the biggest loss to the book-buying public since the closure of an independent bookshop in Camden Passage.
PETER GRUNER