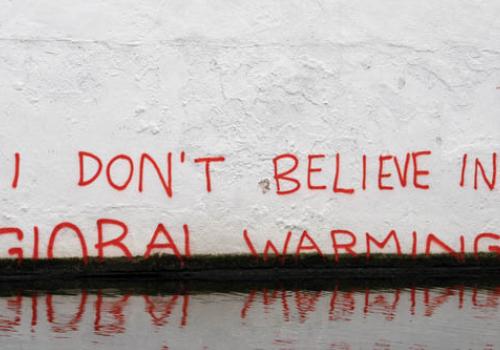 HAS Banksy been inspired by Santa’s unconventional transport arrangements?
For what is believed to be his latest handiwork – one of four new pieces to appear along the Regent’s Canal over the weekend – it seems the feted dauber has commandeered the services of a canoe.
That or he saw Rudolph on a reconnaissance mission and hitched a lift because his “I DON’T BELIEVE IN GLOBAL WARMING” message has been sprayed on a canalside building inches above the watermark, with no apparent way of getting to it other than by boat.
The letters disappear below the water, interpreted by some as a swipe at the outcome of the Copenhagen climate conference which took place last week.
Three other works showing a boy catching Banksy’s signature on a fishing line, a decorator pasting up graffiti wallpaper and a rat wearing a top hat and suit have have also appeared near Oval Road Bridge just metres away from British Transport Police headquarters.
While it is unofficial, Camden Council has a policy of safeguarding Banksy’s work.
This came in for criticism last year when a number of pieces by other graffiti artists were removed from beside the famous maid stencil in Chalk Farm, leading some people to accuse the council of double standards.
The UN Copenhagen summit ended at the weekend without setting legally binding climate change targets.
JAMIE WELHAM

HELLO EVERYONE < I READ THIS PEACE IN THE PAPER AND IT REALLY GOT ME THINKING. I PUT THIS LITTLE RAP TOGTHER EXSPRESSING SOME OF MY VIEWS. I REALLY WOULD LIKE TO THINK BANKSY'S HAVEING A POP AND HIGHLIGHTING THE DISBELIEFE IN ALL THIS GLOBAL WARMING STUFF THAT WE NOW HAVE TO LIVE UNDER.

in my local rag,
there's a peace on a artist,
yes its controversial,
as the counsel are guilty of not being the smartest.
they recognise banksy's skill,
and do allow him to advertise,
is this positive discrimination,
fare play is not in this exercise.
now onto the "quote",
"i don't believe in all this global warming",
is banky serious or having a pop,
with this message on a canal bank submerging, thoughts are forming.
i would like to think he's highlighting,
the lies in this environmental scandal,
and just like the joes poems,
people will just switch off as the truth is to much to handle.