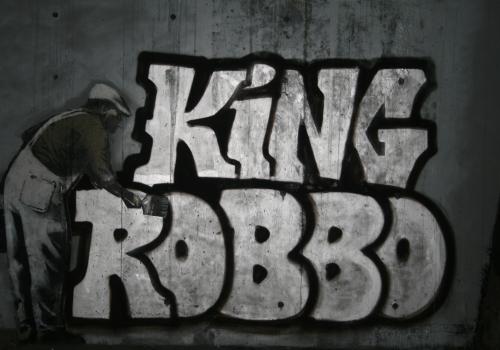 Pictured: The canalside scene after Robbo reportedly hit back against Banksy

CAMDEN Town could become a graffiti battleground if a feud between two famous street artists triggers a spree of copy-cat taggings, a business leader has warned.
Banksy sparked outrage when he sprayed over a previously untouched 24-year-old mural by one of the pioneers of the capital's graffiti scene “King Robbo” along the Regent's Canal last week.
But on Christmas Day, Robbo retaliated, tagging his name in giant letters over Banksy's painting of a decorator, seizing back his space and avenging what is viewed in graffiti circles as the ultimate mark of disrespect.
While the tit-for-tat exchange has been welcomed by some graffiti aficionados as a return to the craft's golden age of the 1980's, where wall space was a fierce battleground, others who see name tagging as nothing less than vandalism, fear it could prompt copy-cat sprayings and lead to an all out paint war.
Simon Pitkeathley, head of business group Camden Town Unlimited (CTU) said: “I was glad to see Banksy back in Camden Town and the area has always had an artistic heritage. Banksy's work is more than just graffiti, it's social commentary. In a way a battle between two prominent street artists could be seen as interesting but what we don't want to see is a load of kids running around and tagging their names around because that just detracts from everything. This sort of ego tagging is criminal.”
Banksy covered up Robbo's original piece under Camden Street Bridge with the image of a decorator pasting over his work. Now Banksy's workman still stands, but it appears to be painting King Robbo's name in silver letters, thus paying homage to the aritst.
While graffiti is a criminal offence, artists like Banksy whose works regularly fetch hundreds of thousands of pounds and are preserved by Camden Council, have created a problematic grey area.
The feud erupted on the photography website Flickr when King Robbo and his fans attacked Banksy's audacious move. It has since spilled over onto online forums, with a host of theories offered for why the row started.
One using the name Sigma called the act a destruction of street art history.
“Now I like Banksy's stuff and I like this but the cost is too high. Fair enough over the years this piece got pretty dogged and vandalized but for the most part it was still visible history. Long live King Robbo,” he wrote.
Another, calling himself Citrus Topnote Jr wrote: “In the world of graffiti you don't use other people's work as part of your own unless you're friends with them and you have agreed beforehand.
“Regardless of the condition of the Robbo, it should have been left alone. Someone who's been around as long as Banksy should know the drill by now. Even more so a street artists going over a wirter. That sort of s*** is asking for trouble. Watch the outcry when this “piece” of his gets wrecked.”
According to the Graffoto website, in a book called London Handstyles published this year, Robbo claims that Banksy had been disrespectful to him when they first met. The website concluded: “Robbo has more than matched Banksy's wit. Robbo's piece deserves recognition and it's quite unlikely that Banksy's intended effect was to give the massive elevation, appreciation and profile that is coming from this spat.”