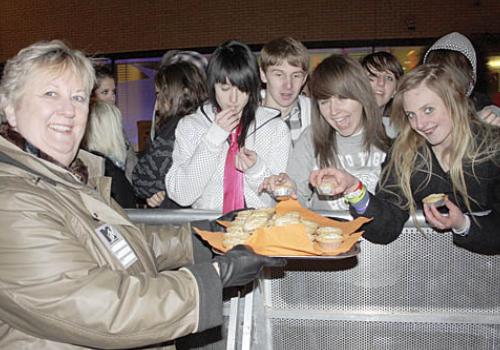 LIGHTS... Camden... Action.
It was the turn of Camden High Street to have the Christmas lights switched on this week – and the event marked the beginning of what it is hoped will be an annual knees-up.
Bands Fightstar, Hollywood Undead and Kids in Glass Houses played from the balcony of the MTV building in Buck Street to the crowds below before the lights were switched on by council leader Keith Moffitt and business group boss Simon Pitkeathley.
Fightstar’s frontman, former Busted singer Charlie Simpson, paid tribute to the area’s musical heritage.
He said: “We had our first gig at Underworld and then the Dublin Castle. Camden has the best music venues and the best range from small to big. It’s a culture unto itself.”
The £10,000 party tab was picked up by Camden Town Unlimited, a group representing the business interests of Camden Town, and Camden Council, as hordes of music fans were served free mince pies to warm them up.
Celebrating a successful event, Mr Pitkeathley said: “It think it went well, it’s a good foundation. If we can build this up into something, it becomes more of a annual event that enables us to attract more shoppers.”
CHARLOTTE CHAMBERS