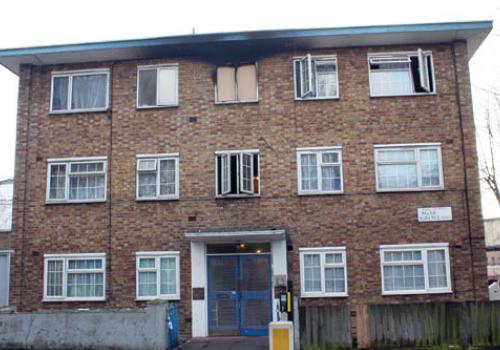 FIREFIGHTERS rescued a man hanging by his fingertips from a window ledge 20 feet from the ground following a suspected arson attack in a Camden Town block of flats.
Four people were taken to University College London Hospital suffering from smoke inhalation after flames took hold in the Agar Grove house, which residents described as temporary accommodation for the homeless. Four fire engines and 20 firefighters were called to the block to tackle the blaze just before 3am on Tuesday.
They rescued one man hanging from the windows and another two trapped on the second floor in the communal stairway, a Brigade spokesman said.
A 21-year-old man living on the first floor described the dramatic moment he realised there was a fire, saying just 20 minutes earlier he had put another one out in the hallway.
“I put the first one out, it was in a little black bag in the corridor,” he said. “Then 20 minutes later there’s loads of Fire Brigade here. I came out and saw loads of fire and flames coming out of the ­window.”
Describing the moment his neighbour, “Steve”, was rescued from the house by firefighters on a ladder, he said: “He came out all covered in black smoke and wearing an oxygen mask. He was coughing and being sick – all this black stuff came out of his mouth.”
Police have appealed for anyone with information to contact them and warned that lives could have been lost.
No arrests have been made.
PC Lisa French from the Major Crime Unit said: “This fire is being treated as a suspected arson attack. It put people’s lives at risk which we take very seriously and there will be a thorough investigation to catch those responsible.”
Neighbours described hearing a loud bang after a discarded fridge in the hallway exploded.
CHARLOTTE CHAMBERS