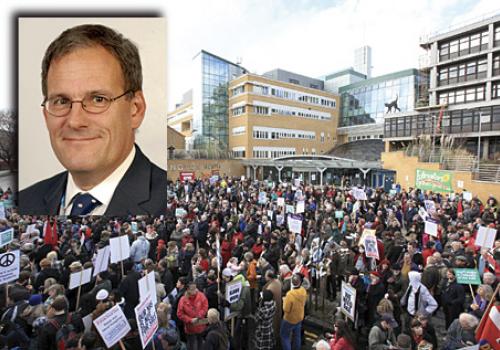 THE chief executive of Whittington Hospital has suddenly quit his £145,000-a-year job after 18 months in charge.Rob Larkman was said to have followed another NHS executive, Rachel Tyndall, the boss of North Central London sector trust, in “moving to a senior role within NHS London”.

The announcement of his departure was made on Friday but the nature of his move was revised by a spokesman for NHS London – the capital’s health funding authority – yesterday (Wednesday).

Unusually for a high-level change of staff, there was no parting message from Mr Larkman, and a spokeswoman at the Highgate hospital added: “You can’t talk to him – he’s already gone.”

Last month, in his “Larkman’s Line” staff bulletin – printed in the hospital’s internal monthly newsletter – Mr Larkman said: “I am looking forward to working with you all in 2011…”

His time at the Whittington coincided with one of the biggest debates about its future. Thousands turned out to march defiantly against a government plan to close the hospital’s A&E and maternity services. The proposals were scrapped by the Coalition government after the people power protest.

While at Camden Primary Care Trust, Mr Larkman tried to introduce privately-run “polyclinic” health centres in Bloomsbury and Euston. But he and the rest of the board were forced to back down after a doctors’ and patients’ revolt. He also ‘signed off’ the controversial decision to award American health giant UnitedHealth contracts to run three surgeries in Camden.

NHS insiders describ­ed Mr Larkman’s departure as “strange”, speculating it could be linked to a decision to scrap a plan to merge as a “single organisation” with the Royal Free Hospital in Hampstead.

Whittington chairman Joe Liddane said: “I would like to thank Rob for his work in steering the hospital to this juncture. His excellent management of the Whittington has been valuable throughout the period of change.”

Rebrand – But cat is safe

WITH the NHS facing the biggest shake-up since 1948, what is top of the agenda for bosses at Whittington Hospital?

Waiting times in A&E? Infection rates? Or a snazzy new logo to match its new name?

From April 1, the Highgate hospital will be reborn as “Whittington Health”. Signs will change, old stationery will be dumped and letterheads shredded. The change follows a decision in December to merge with Islington and Haringey “community health services”. About 1,500 staff will become directly employed by Whittington Health.

A hospital spokeswoman insisted there would be no significant cost to the rebranding exercise, adding: “We will have to change a few signs. But we won’t lose the cat!”