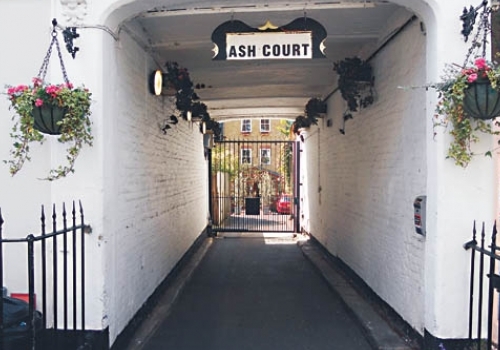 A CARER who was filmed beating a severely disabled great-grandmother on a secret spy camera in her Kentish Town care home was jailed for 18 months on Friday.

The shocking footage will be revealed in a BBC Panorama special investigation on Monday night.

The abuse was discovered after Ms Worroll’s family, fearing she was being abused, installed a motion sensitive camera inside a fake clock in her care home bedroom.

She has Alzheimer’s, is severely disabled and cannot speak – meaning she could not reveal her ordeal.

Her son, John Worroll, a crane driver who lives in Swiss Cottage, told the New Journal: “She is slapped on the legs and arms violently. It is quite awful footage. I’m angry and disheartened. Mum spent her whole life working – she was quite a grafter – and paying her tax. She was a fantastic mother and she ended up at the hands of this brute.”

Ms Worroll was moved into the privately-run Ash Court after the Camden Council announced it would close one of its last “in-house” care homes in Wellesley Road, Gospel Oak.

The care service in Camden – and across the country – has steadily been privatised over the past two decades and Mr Worroll said he had concerned about carers’ low pay.

He said: “My personal opinion is that if the staff were paid a better wage the standard of care would be higher.

“A lot of these carers are from agencies that supply to different care homes. An agency make large profits and pays a minimal wage – that might be why the standard is not up to scratch. These people are very vulnerable – it is such a trusted position.

"Mum can’t talk back, she can’t walk, she can’t read, she can’t go to the toilet. It was only because my sister put the camera in that we are having this conversation now.

“I think if anything comes out of this, the actual people who look after the elderly need to be better vetted. [The system] needs to be overhauled.”

Ash Court had achieved a three-star “excellent” rating from the Care Quality Commission – the top rating awarded by the Government’s care standards watchdog.

A spokesman for its private operators, Forest Healthcare Ltd, said the care home worked towards a Gold Standard Framework for End of Life Care.

According to its website, Ash Court can “justifiably be described as wonderfully warm, vibrant and exceptionally friendly”.

Mr Worroll said his mother was moved there be­cause the centre “had a good write up”, adding: “The trouble is with these inspectors is they don’t look too deeply – they just check that everything is spick and span.”

Mr Trainer, deputy director of the CQC in London, admitted abuse could be missed by inspectors.

Mr Trainer said: “This case highlights the fact that concealed abuse of the elderly can take place even in a well-run care home.

There were, at the time of the assault, 35 other Camden residents with physical difficulties living in Ash Court, which has 62 rooms. A further 19 residents have been placed there by the NHS.

A spokesman for Forest Healthcare said they had been “shocked and disappointed” after viewing the footage.

A statement said: “The dignity, health and well-being of all the people we support at Ash Court remains our number one priority.”

The spokesman added:“We are pleased justice has been done in the case. Four female carers were also immediately suspended.

As soon as we were given the footage to view in November 2011 we completed disciplinary proceedings and all four were dismissed.

From the time the allegations were made until their dismissal these individuals were barred from working at Ash Court or any of its sister homes.

The wider staff team at Ash Court have provided many years of excellent care and were shocked by the truly unacceptable behaviour of these individuals.”

A Camden Council spokeswoman said: “As soon as we were made aware of an allegation of abuse we carried out an immediate safeguarding review.