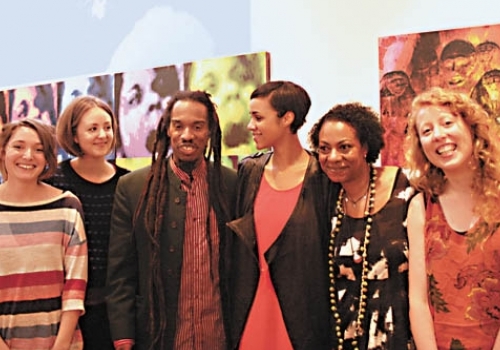 BENJAMIN Zephaniah recited a new poem at the launch of an exhibition about the Middle East at a Bloomsbury art gallery on Saturday.

Laila Shawa’s work includes two sculptures of women’s bodies, one wrapped in explosive devices and another with chains around it.

The event at the October Gallery in Old Gloucester Street saw a discussion about the struggle women have faced to have their voices heard.

"Yet we have one day in a year allocated to us. Why do we accept this allocation?”

Labour councillor Sally Gimson said: “Politics is very male. The feeling in the House of Commons is extraordinary.

"It’s as if women don’t have a right to be there. But Camden Council is different to that, it’s pretty much 50-50 male and female.

"That’s something we need to see in every council one day, and in the House of Commons.”

Mr Zephaniah’s poem was about his Jamaican mother coming to an England where the streets were meant to be “paved with gold”.