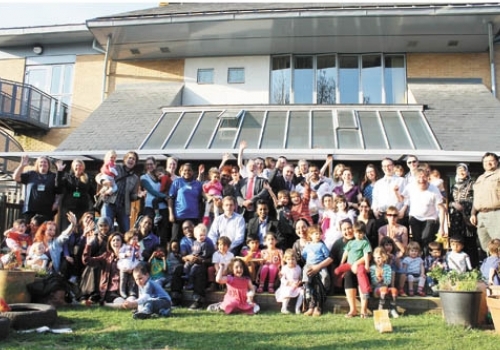 A NURSERY is celebrating victory in its fight to stay open after campaigners helped bring it back from the brink of closure.

Children and parents gathered in the bright sunshine at the Caversham Centre in Kentish Town on Thursday after its future was guaranteed by parent volunteers determined not to let it close.

It comes after they received the “dreaded” news in January that both the Caversham and the Acol centre, in West Hampstead, would be­come victims of council cuts to play services.

Camden Council said they were the smallest and least efficient centres in the borough.

Arabella Murray, whose six-year-old daughter Stella attended the centre at the time, joined 12 other concerned parents to fight the closure.

She said: “Affordable childcare is the glue that holds together the lives of working families in the area – and you just can’t hold the bits together without it these days.

I am remarkably touched that we have got this far.”

Ms Murray added that local councillors from both Kentish Town and Cantelowes wards had been instrumental in keeping the campaign alive, giving extra praise to Councillor Georgia Gould who worked as a go-between for parents, the council and the Queen’s Crescent Community Association (QCCA).

The Caversham Centre had just 25 places for local children and was making £120,000 a year with the council topping up an extra £320,000 annually.

Now, run by the QCCA, it has expanded to 49 places and extended the age range to eight years with hopes it will now break even.

As the centre provides 100 per cent of its places to local Camden families the nursery receives full funding for the rent that it pays to the council.

It has also introduced a three-tiered pricing system so that fees can be affordable across the board depending on income.

Mr Dobson said: “I was very sad when I heard that it was possible that this centre could close down.”

He added: “It just shows that if we work together and we all accept that in cases like these everyone’s motives are genuinely good and aimed at getting the best outcome, then some amazing things can happen even in the face of the cuts.”

As a celebration the assembled children were treated to a book reading by award-winning children’s book author Louise Yates.