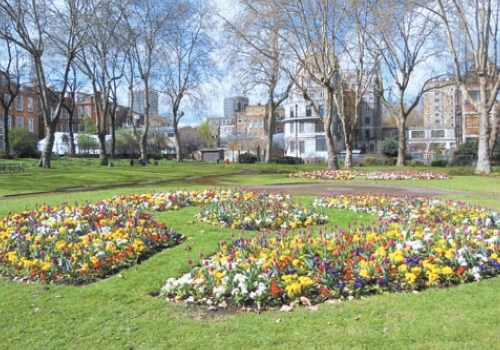 THE 200-year-old tomb of a historic Camden family of undertakers is among dozens of graves that will have to be exhumed to make way for a new high-speed railway line.

St James Gardens, a consecrated former church burial ground in Cardington Street, Euston, will be dug up if the High Speed 2 rail link from London to Birmingham goes ahead.

The government wants to tear down hundreds of council homes and dozens of buildings in Euston and Regent’s Park for the project – a move which will be challenged by Camden Council in the High Court.

The new gateway to Euston will be the “largest development ever seen in London”, according to HS2 bosses.

It will cover an area 17 times bigger than Arsenal’s Emirates stadium.

But the New Journal has learned that the current route will crash through the final
resting place of the Leverton family and tens of thousands of Camden’s forgotten dead who are buried in the gardens.

The HS2 link has the backing of Transport Secretary Justine Greening. Historians estimate 50,000 bodies have been buried in the public gardens over more than 300 years, although only a few dozen headstones remain.

John Leverton, founding father of the family-run undertaker’s business that was responsible for Princess Diana’s funeral, was buried in St James Gardens in 1815.

He was “for nearly half a century a resident and house holder in the Parish of St Pancras”, according to his tomb.

The headstone lists 11 other family members, with death dates ranging from 1815 to 1848, including a three-year-old girl, Charlotte Leverton.

Clive Leverton, a director of the family firm, said yesterday (Wednesday) he had no idea the HS2 route could affect the family grave, adding he would like to see the plans before making any comment.

The gardens were purchased through an Act of Parliament in 1788 as an additional burial ground for St James’s Piccadilly church cemetery.

John Stebbing, the church minister, is buried there along with other names from Camden’s past.

Among family tombs is one for the Christie family, including Captain Charles Christie, who died “in an attack made by a body of Russian Troops” in Persia in 1812, and Edward Chris­tie, who died in Jamaica of a fever “contracted on board a slave ship”.

A stone obelisk, with the upper part broken, is believed to commemorate Charles Fitzroy, first Lord Southampton, and his wife Anne.

The Southampton family owned land in the south-west part of Camden.

The centrepiece of the gardens is a grade II-listed cast-iron drinking fountain on an octagonal base.

A plaque at the entrance records its opening as a public garden and how it was maintained by the former St Pancras Borough Council.

It was re-landscaped with a garden and rose beds by Camden Council in the 1980s.

Penny Jones, who lives in Mornington Crescent and has researched the history of the gardens, said: “It’s the only human bit on that side of Hampstead Road, the rest is a march to Warren Street of steel and glass.

“I have lived in the area since 1962 and around five or six years ago did some research.

"The gardens were used as part of a groundbreaking idea to treat alcoholics with healthy fresh air.”

A HS2 spokesman said it was “really too early” to comment about how it will deal with the graves, adding: “Arup is working on the detailed design of the station and we can look at this and other local issues through our community forums and stakeholder engagement programme.”