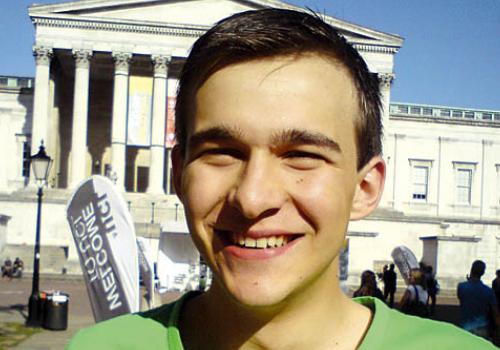 DEVASTATED parents who lost their son to a sudden heart defect just hours after they left him to settle into university life have called for greater awareness of the killer condition.
Tom Reid, 19, died from an undetected heart disorder while out with friends at Koko nightclub in Mornington Crescent in the early hours of September 28.
Sudden Arrhythmic Death Syndrome, also known as Sudden Adult Death Syndrome (SADS), kills 12 young people a week, but is still little known. The student’s family had never heard of it until his shocking death.
The disorder, which affects the electrical signals that regulate the heartbeat, is often gen­etic and runs in families.
An investigation into Mr Reid’s death revealed his mother Halina has suffered heart palpitations and had been talking about her irregular heartbeat with her son the day before his death.
He had told her: “Mum, mine sometimes does that,” his father Antony Reid, a sales engineer, said at his son’s inquest on Tuesday.
Heart palpitations, blackouts and dizziness are common symptoms and can lead to detection if the sufferer is tested. Mr Reid’s mother has since been tested and cleared of having the same risk of collapse.
The family, from Leeds, now want more done to stop other young people falling victim.
The St Pancras inquest heard that the student, about to start a degree course at University College London, had felt troubled by the pounding basslines of the music played at the club in ­Camden High Street.
His friend, Alisha Riseley, told the inquest that as the club filled up with “freshers”, Mr Reid was pushed towards the speakers. She said: “Tom said he felt like the bass was getting to his heart and we went to stand at the back.”
She said he told her: “My heart feels funny. I think the bass is affecting me. Oh God, I feel very weird. My heart is beating so fast.”
A medic at the club advised him to take an ambulance to hospital, but he collapsed as he was debating whether he wanted to “make a fuss”. Despite several attempts to “shock” his heart, the heartbeat returned only fleetingly. He was de­clared dead at University College Hospital less than two hours after first feeling unwell.
Toxicology tests re­vealed there were no traces of drink or drugs in his body and he was apparently completely healthy. Hospital pathol­ogist Dr Sian Hughes said his heart was structurally sound and he most likely died from SADS.
Antony Reid said his family were “horrified” to learn SADS killed more than 600 young people a year. “Prior to Tom’s death we had never heard of Sudden Arrhythmic Death Syndrome,” he added. “We still find it incomprehensible how a fit and healthy young man – with no previous medical issues – can just collapse and die.”
Had his family been aware of SADS and had access to cardiac screening maybe his son would still be alive, he said. Patients identified with the condition can take medication to reduce the risk or carry a portable defibrillator.
Coroner Dr Andrew Reid recorded a verdict of natural causes and said “more and more” SADS cases were being picked up by cardiol­ogists.
“I hope lessons may be learned from his tragic death, although those lessons may be of limited consolation to his bereaved parents and relatives,” he added.
University College Hospital heart specialist Dr Pier Lambiase said a public campaign warning young people of the dangers of an irregular heart rhythm was needed. “The important thing is if you do have palpitations or blackouts you should see a doctor to make sure you’re not harbouring a disease,” he said.
Toni Scoullar, mother of 18-year-old Camden Town beauty therapy student Beckie Borg, who died in February from SADS, said more research was needed. She criticised the British Heart Foundation for spending just 2 per cent of its budget on arrhythmia research and called for a publicity drive by the Department of Health. “These deaths can be prevented,” she said.
Koko director Larry Seymour said his thoughts were with the Reid family, adding that anything that warranted a follow-up at his club, in terms of equipment or speakers, would be done.
CHARLOTTE CHAMBERS

Father pleads: How many deaths will it take?

The initial online press reports such as “student dies of alcohol poisoning” were really disrespectful, writes Tom Reid’s father Antony.
Waiting for toxicology reports to rule out alcohol or drugs seemed to take forever. When these reports came back, we started our own research and fairly quickly came across Cardiac Risk in the Young (CRY) website.
This charity has been really supportive of what’s happened to our family and have helped and advised us with the screening process.
Because of the support we have received from CRY, it is my intention to raise funding and awareness by doing something a “little different”.
The problem is we know at least 12 young people die from SADS each week and the figure I am sure will soon be 15. Until it happened to us we didn’t know anything about it.
What’s more difficult to comprehend is that, should Tom have had a routine ECG, his condition may have been detected and medication given to him to treat it. We just don’t know.
So my question is simple: how many deaths a week do we have to get to for the government to act? 15, 18, 21?
It was quoted somewhere: “We have to get our cars MOT’d every year so why shouldn’t our children have one too?”
After what’s happened to Tom, and to prevent other families going through the same ordeal, I believe all young people should be screened as a matter of routine.
At the moment I feel all my energy has been taken away from me. I know I will get it back and intend to do whatever I can to raise awareness of SADS.