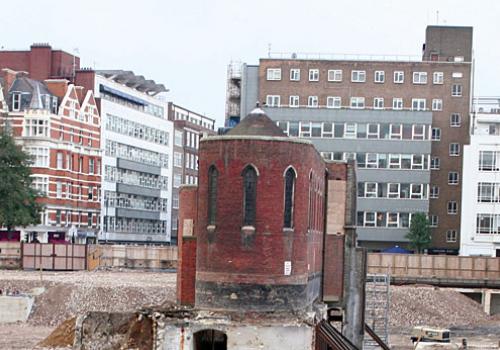 DREAMS of turning a former hospital site into a massive community allotment have been left in tatters after its owners ditched the ground-breaking scheme and put the land up for sale.

The 800 plots planned for the bulldozed Middlesex Hospital site in Fitzrovia would have been a world first as an expansive site in the heart of a major city used for growing vegetables instead of taken up by office blocks or luxury flats.

The project unified the neighbourhoods of Fitzrovia and Bloomsbury after the collapse of the “NoHo Square” development on the site left the land barren and unused.

Conservative ward councillor and Bloomsbury art dealer Rebecca Hossack – one of the main drivers of the idea – said a “neighbourhood army” would now be unleashed if the allotment idea was not revived.

More than a year’s work had gone into the project and 800 grow-bags full of manure have already been purchased in anticipation.

Hundreds of families, schoolchildren and shopkeepers were ready to plant seeds on the site, nicknamed “Fitzgrovia”.

But now Kaupthing, the Icelandic bank that owns the three-acre site, has torn up the plans telling Cllr Hossack and her supporters that they want a quick sale.

In a letter to Cllr Hossack last week which she said left her in tears, the bank’s chairman said: “The nature of the sale process is such that a new owner may take possession of the site later this year, which means that the application for planning permission for the temporary use on part of the site cannot go ahead.”

Cllr Hossak said: “The people in suits aren’t going to win. This is about more than money, this is about people.”

The 800 grow-bags, worth around £4,000, thousands of tonnes of manure and everything from gardening sheds to bicycles, seeds to plant pots, donated by ­supporters will have to be dumped unless Kaupthing can be forced to reconsider.

The plan had captured the collective imagination of thousands of people who had contacted Ms Hossack to ask for one of the plots after she negotiated a deal with the bank to use the land for a year.

A section was to be loaned to nearby All Souls Primary School for pupils to grow their own school dinners, and plans had mushroomed from mere allotments to building a community garden which could host concerts, fetes and activity days. A planning application was due to be heard by Westminster Council this month.

In an impassioned letter written to gardeners, Ms Hossack vowed to fight for the right to build the only allotments in central London.

“I am absolutely furious,” she said. “We have really been let down. It has taken a year of doing everything they [Kaupthing] wanted, and now they tell us we’re not allowed on the land. We are not harming anyone. They have turned down bags of gold not bags of dirt. We were going to heal a scar in the community. But I don’t want this to be a victory for the suits. We are going to show them, that you can’t just walk over us and you can’t just plonk a load of housing and retail units in the middle of our community.

Cllr Hossack has turned her two galleries into temporary “war cabinets” in a bid to keep the plans alive. Among the future battleplans is a night-time “plant pot vigil”.

Christopher Quinton, senior manager at All Souls school in nearby Foley Street, said: “We are very upset about this. The children will be devastated because they were really looking forward to getting out on the allotments.”

Pierre Condou, who lives in Newman Street and owns the Paramount members club on the top of Centre Point, said: “I am so disappointed that we have got this far, only to have the rug pulled from under us.”

A statement from Kaupthing said: “We understand that this will be a disappointment for the local community given the time and effort put into the project. In light of this we intend to pass on all the information relating to the allotments’ project to bidders, as they may be interested in it, although we cannot guarantee this and there will be no ­formal obligation on a new owner to do so.

“Following our meetings last week with Councillor Hossack we did look into the pos­sibility of having allotments on the site for a shorter period, over this summer. We have looked into this and unfortunately it is not possible to do this for legal reasons.”

The Middlesex ­Hospital site has been derelict since property developers Candy and Candy pulled out of their “NoHo Square” scheme in 2008.