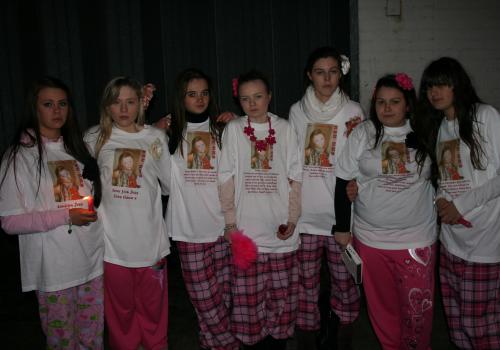 IN pink pyjamas and Ugg boots, teenagers braved the cold last night (Wednesday) to pay their own special tribute to Jessie Wright, their 16-year-old friend lost in the most chil­ling of circumstances.

This was the poignant scene as more than 250 men, women and children descended on a street close to where the Maria Fidelis schoolgirl was found dead on Thursday.

The scale of the candle-lit vigil revealed how her death, the subject of a murder investigation, has devastated the close-knit community on both sides of the Camden and Islington border in King’s Cross.

Among her friends, the dress code was arranged in advance: sombre black swapped for Jessie’s carefree style of bubblegum pink and furry boots.

Next to the teenage girls, adults stood close to a shrine of pink balloons, ribbons, candles and photos, shaking their heads in disbelief.

Prayers were said and memories were traded.

From an iPod, the melodies of Jessie’s favourite songs rang out and then together the crowd stopped and broke into an impromptu chorus of Tina Turner’s Simply The Best.

Among the crowds, just yards from the spot in Outram Place where her body was discovered, relatives shared hugs of comfort with friends.

At one point, a Chinese lantern rose into the sky to a soundtrack of shouts: “We love you, Jessie.”

Jessie’s little sister, Molly, wearing a T-shirt bearing her picture, said: “I miss her. I always looked up to her. It ain’t the same without her. She was caring and lovely, the best sister I could ever have asked for. I used to ring her every day.”

Julie Lucraft, another aunt, said: “Jess, I love you, and miss you. Sleep now and I’ll see you again.”

Childhood friend Stevie Parker, who organised the vigil, said: “This is from all the girls. Jessie was always smiling, happy, never had a bad bone in her body and was so easy to get on with.”

The Rev Michael Learmouth, from St Andrew’s Church in Islington, who led prayers, said: “We want to reclaim our community for the powers of good. We ask you to hear our cries of grief, to hear the anguish of our hearts, it’s almost beyond our understanding.”

Relatives of Ben Kinsella, the 16-year-old murdered in June 2008, joined the vigil in support. Friends are now organising a march in her honour – similar to the one held in Ben’s name.

Scotland Yard launched a murder inquiry after the 16 year-old was discovered close to the old York Road railway station in King’s Cross.

Detectives are still piecing together her final movements and establishing who she met and spoke to.

Jessie had bravely overcome daunting surgery two years ago after a bout of pneumonia left her with fluid on the brain. Relatives and friends said that after recovering she was determined to make the most of her life, occasionally bending the rules – pals remembered her “cheeky fags” and occasional “bunking” – but always facing life’s hurdles with an infectious smile and a proud spray-on tan.

Her aunt Sarah Lucraft said: “She fought through three operations only for this had to happen to her. It’s disgusting.”

Those who knew her well told the New Journal that Jessie had a zest for life which they could hardly keep up with.

“Anything she wanted to do she’d do because life was too short for her,” said Stevie Parker, 17, who grew up with Jessie and organised last night’s candle-lit vigil on the Delhi Outram estate, close to where her friend’s body was found.

“We’d always bicker with each other but she’d always say ‘shut up, stop being stupid’. Now we know why. She was saying it’s because life is too short.”

Jessie’s big worry, according to friends, was that people could see her scar – the small mark where doctors had to cut part of her skull during critical operations.

Friends said that Jessie, who grew up in the Bemerton estate, moved to Kent for a short while to live with her mother when she was 14. But she missed her old life and network of friends around the south of Camden and Islington and returned to live with her grandmother. She fell ill soon after and underwent surgery.

Stevie said: “She was in intensive care in a specialist hospital in south London. We thought that’s it for her, but a couple of months later she was back with us. She said she was really scared but she knew she’d get through it. It was such a big shock. She was a right little trooper. She kept asking, ‘Can you see the scar on my head?’”

Police conducted door-to-door enquiries on the estate and have kept open their appeal for help throughout the week.

Officers arrested a 19-year-old man on Thursday, questioned him and charged him with murder late on Sunday.

Friends and former classmates have used internet sites such as Facebook – a bugle for the text messaging generation – to pay tribute to the girl who lit up their life, and to organise the vigil which saw hundreds gather last night (Wednesday).

Stevie said: “From seeing her playing in Crumbles [playground] to this, it’s mad. I’ve known her my whole life. I loved her so much but now she’s gone it’s made me realise how much.”

Unable to think about anything else and struggling to find any sense of it all, friends spent the past week repeatedly visiting the spot close to where Jessie was found in Outram Place, laying flowers, teddies, and cans of her favourite drink, Coke, on the ground and singing Jessie’s best-loved songs.

Another friend, Lauren Kearney, 18, said: “She had a right little chatty voice. She just had an impact on so many people. She was the baby, the youngest of the group.”

Members of Jessie’s family attended a service at St Andrew’s Church in Thornhill Square on Sunday.

Friend Gina said: “She was like my little cousin. I love her so much and miss her deeply. She will forever be in my heart. She was the best, funniest outgoing person. She used to love going out.”

An inquest into her death was opened on Monday but will not be resumed until police inquiries and court proceedings are over.

As teenagers gathered for comfort and traded stories of their lost friend, older residents in King’s Cross told how Jessie’s death had left them stunned.

Builder and father-of-three Peter Harvey, 37, said: “The kids aren’t going to be going out, that’s for sure.

“It seems you can’t trust anybody. Everyone knows everyone here. It’s quite close-knit but I’m scared for the kids. She’s had no life. Nothing on this Earth could justify this.”

Ward councillor Paul Convery said: “Jessie’s one of the few girls who used to hang out in the neighbourhood. I remember seeing her and her friends having a picnic in Bingfield Park. They’d hang out with the boys and I had the impression that she and her friends had a calming influence on them.

“If there is one positive thing we can do in Jessie Wright’s memory, it is to redouble our efforts to stop the anti-social behaviour in this neighbourhood.”

A police spokesman said: “Anyone who can shed light on where she was and who she might have met should call the Incident Room on 020 8345 3985.”

A TEENAGER has appeared in court charged with the murder of Maria Fidelis schoolgirl Jessie Wright.

Zakk Sackett, who appeared in custody wearing a grey T-shirt and plastic rosary beads, spoke only to confirm his name and address at Highbury Magistrates’ Court on Monday morning.

Prosecuting, Ellis Williams asked for an order to be made banning reporting of Ms Wright’s identity.

Magistrates granted the order but were forced to rescind it after members of the Press made representations that it was illegal to place such an order when the subject was deceased.

Mr Sackett’s case was sent to the Old Bailey yesterday (Wednesday) where he was again remanded in custody pending his next appearance for a plea and case management hearing on June 14.