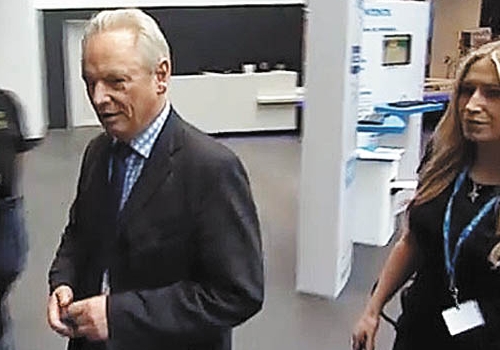 YOU won’t spot Frognal councillor Laura Trott in the main team picture this year, although she was at conference. Her hands were full chasing around her paymaster Francis Maude (right), the minister for the cabinet office. As his special adviser, she had a lot of explaining to do about his fruity choice of words in an interview with the Independent on Sunday, in which he described the National Trust’s views on government planning reform as “bollocks”.

A SHAKE of hands with George Lee (right), the candidate beaten at the general election last year in Holborn and St Pancras by Frank Dobson. He is recalled for telling his life story of how he was raised in a pig shed – literally – in the Far East before coming to this country and becoming a respected police officer. Will he pop up again for another election battle? “Well, I’m on the list,” he beamed.

LOSING to Frank in Holborn and St Pancras isn’t always a bad omen for long-term electoral fortunes. John Major was beaten there many moons ago and went on to become Prime Minister. A more recent loser, Margot James, tried again in 2010 and became MP for Stourbridge. Tipped for important duties in the years ahead, she was talking at the all right fringe meetings this week. Does a place at the Cabinet table await?

THE last train home from Manchester on Monday was a lively affair.
Members were looking to make the two and half hours of rail time fly with wine and packs of Carlsberg. Orpington MP Jo Johnson, who lives in Camden Town with his Guardian journalist wife Amelia Gentleman, was also on board. As he walked through the train’s aisles, nobody knows what he made of the merry boozing. His brother, Boris J, after all, banned drinking on public transport in London in one of his first moves as Mayor.