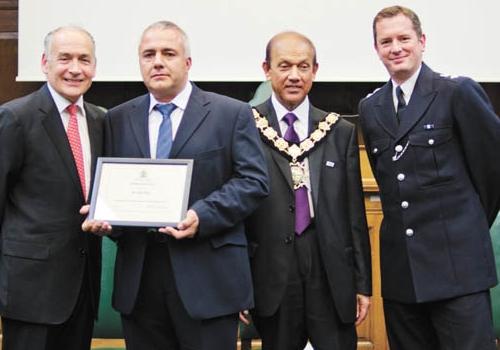 A CAB driver who witnessed a woman being stabbed at random in the street, stopped his car and rushed the victim to hospital was among award-winners at a ceremony organised by Camden’s top police officer.

John White and another member of the public, Jacqueline Barnett, were the heroes of the hour after the knifing in Finchley Road, Swiss Cottage, in January. Ms Barnett gave first aid to the victim in the back of the taxi as it raced to the Royal Free Hospital in Hampstead.

They were given the framed certificates by borough commander John Sutherland at a ceremony at the Town Hall on Friday afternoon.

Other awards for outstanding acts of service honoured Camden police officers who controlled a riot at an illegal rave in Holborn and the detective who investigated the death of two-year-old Saurav Ghai when a council estate wall collapsed on him in 2008.

Detective Inspector Neil Wilson told the ceremony that the victim of the unprovoked stabbing in Finchley Road had collapsed with injuries later revealed to include a punctured lung.

He said: “Mr White and Mrs Barnett were unable to get a phone signal in this area so Mr White decided he would transport the victim to hospital for treatment.

En route, Mrs Barnett sat in the back of the vehicle, rendering first aid.”

Richard Greenwood and Annette Corry, the detectives who helped trace and arrest the knifeman, received commendations at the event hosted by newscaster Alastair Stewart, whose son works for Camden police.

The victim recovered in hospital, while her attacker was charged with grievous bodily harm.

The ceremony heard how police tracked down a prolific drug dealer who had been identified  only as “Paul”.
The dealer took taxis to avoid being traced and made only quick stops at drug markets in the south of the borough.

He was caught when detectives traced two of his runners.

When his taxi was stopped, he was found with large batches of cocaine and heroin.

Identified as Donovan Wright, he was jailed in 2010 and then deported to Jamaica earlier this year.

“A conservative estimate of his earnings was £300,000 a year,” said Chief Inspector Louis Smith.

Officers on the case, Phillip Price, Kevin March and Bruce Figg, picked up awards. Chief Supt Sutherland said he would need a separate awards ceremony to honour the officers who defended Camden Town during August’s rioting.