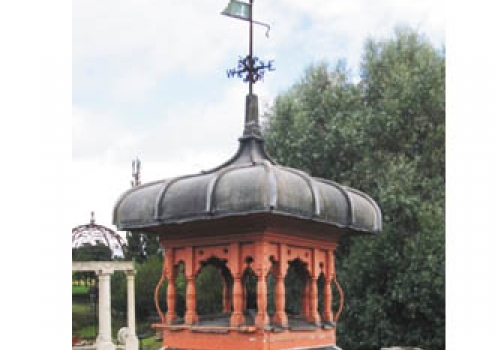 HE is best known for the quirky look and feel of his films, and their trademark set designs – so it is no surprise director Tim Burton wants to create a magical, mystery wonderland to call his own.
The director (pictured left), who lives in Belsize Park in a converted mews studio with his actor partner, Helena Bonham Carter, has asked Camden Council for permission to demolish much of the home and replace it with a new extension.
And to do so, he plans to use reclaimed bricks and historic, salvaged features – including a rooftop cupola complete with weathervane, dating from the turn of the 19th century.
The council’s report says: “The cupola will be a small-scale, somewhat quirky element.”
Designs seen by the New Journal show Burton wants to take away a section of the house built in the 1960s – which his architects say is “dilapidated” – and replace it with a building of a similar size, using reclaimed red bricks, so popular in the Gothic revival period of the 1800s, and old timber and iron work.
The application has been made in the director’s name, but his partner lives next door to him and the couple have knocked a door in their adjoining walls so the two homes are essentially one.
The couple’s co-joined houses date from the mid-19th century and were originally built to provide low-cost hous­ing and studios to artists and craftsmen in the Belsize area.
But the house the director bought next door to his English girlfriend had been radically changed in the 1960s: the design included a glass-encased staircase on the outside of the home. This will be lost if the plans are given the go ahead.
In a report to the planning committee, council officers say the plans are for “substantial demolition” but add that most of the original studio’s fabric would be saved.
Architectural salvage firm Retrouvious have been asked to oversee the work.
The company declined to speak to the New Journal, but their website states that they have done work that is both “architectural and decorative... covering dates of building from the 15th century to now.

We always try to incorporate some quantity of salvaged material, which is not always easy to spot as it is usually treated with a contemporary language.”

And Retrouvious add they gather house trinkets and features from such esteemed places as cupboards from the entomology department at the Natural History Museum, and fossilled limestone after Heathrow airport’s Terminal Two was demolished.