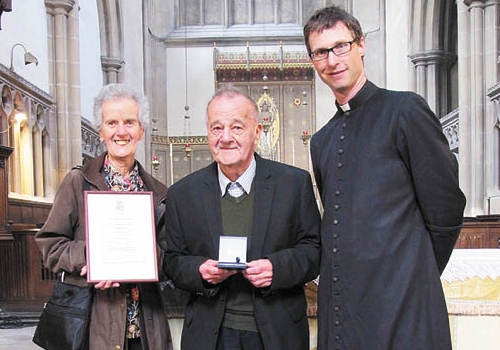 A PARISHIONER has been honoured for 75 years of service to the same church.
Edward Wilkinson was awarded the Order of St Mellitus at St Michael’s Church in Camden Road, Camden Town.

Now in his 80s, Mr Wilkinson has been part of the congregation since 1936 and has since acted as a choirboy, Sunday school teacher and a server.

Parish Priest Father Philip North said: “This award is a wonderful recognition of the contribution that Edward has made to St Michael’s.
“At one point the congregation at St Michael’s had dwindled to single figures worshipping in a derelict building.

Now there are over a hundred people on an average Sunday. Throughout that time Edward continued to serve the church in his gentle and quiet way.”

Father Philip added: “He has been a key figure in the renewal of St Michael’s. We are delighted that his years of service are to be recognised by this prestigious award.”
The Medal of St Mellitus is awarded by the Bishop of London, the Rt Revd Richard Chartres, to those who have made a conspicuous and outstanding contribution to the life of the church in London over many years.

St Mellitus was the first Bishop of London from 619-624 and one of the early missionaries sent from Rome to the south of England.